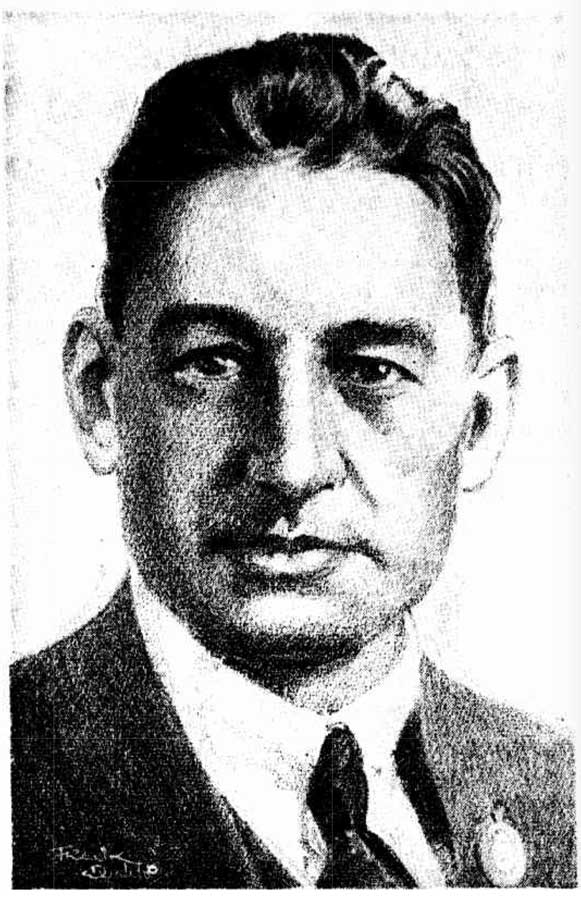 Back In Australia after having been on military work abroad for more than three years, Cecil L. Hartt, the young artist and cartoonist, has settled down to his civil occupation again. Mr Hartt, who Joined the Australian Imperial Force In 1915, landed on Gallipoll with the 18th Battalion in August of that year. Less than a month later he received a bullet through one of his ankles in a charge at Hill 60 and, while he was crawling back to safety, his hip was pierced by a shrapnel pellet. That ended the soldier-artist’s military career so far as service at the front was concerned. After a short spell in hospital at Cairo he was transferred to England, and there he spent five months in hospital. Subsequently Mr Hartt, because of his unfitness for active service, was engaged at headquarters on home service. His artistic ability was promptly recognised by different London journals and drawings from his pencil appeared In “The Bystander,” “The “Graphic,” “London Opinion,” and “The Passing Show.” Between times he did much work for the breezy little papers run in the hospitals and for the Red Cross. 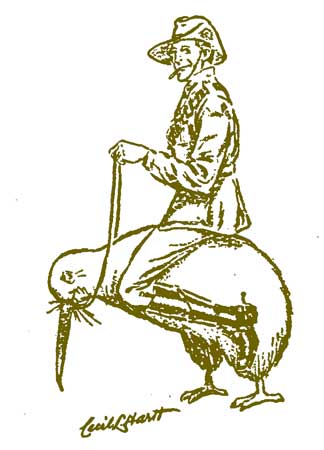 Mr Hartt’s greatest work In London was the production of “Humorosities,” a book which dealt In a humorous manner with the doings of Australian soldiers, chiefly while they were on leave in London. The book is not as well known in Australia us it should be, but in Great Britain it had a large scale and approximately 60,000 copies were printed. An appreciation of the contents of the book is contained in the following letter received by Mr Hartt in February last from the King’s librarian at Windsor Castle:

Many thanks for your ‘Humorosities,’ which is a welcome addition to the literature of the war, and doubly welcome as an Australian’s contribution. It shall certainly be preserved In the Royal Library. It Is strange to look back 29 years when I first visited Sydney. Phil May was there then drawing designs for the Sydney ‘Bulletin.’ I notice that he has left his mark upon his successors. Have you an original sketch or two that you could let me have for the King’s collection of drawings? Could you let me have some to choose from, with the prices marked?— Yours very truly, J. W. Fortescue. 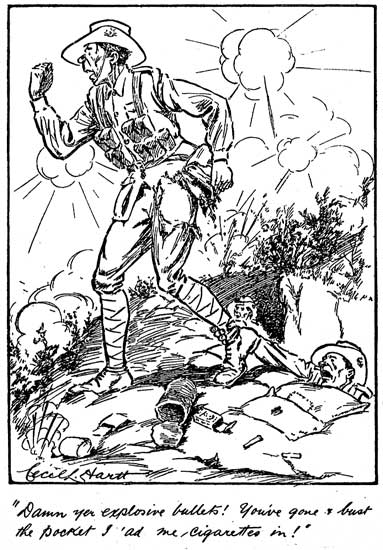 When returning to Australia, Mr Hartt and a comrade kept the invalided soldiers on board in a constant state of amusement by issuing “The Bonzer Times.” It was not a large volume; in fact, it consisted of one sheet only, and that, on account of the shortage of paper, had to be posted outside the orderly room, so that all could read it. But its smartly written descriptions of doings on board kept a crowd round it all day long. Mr Hartt has retained only one copy of the fifty odd issues as a souvenir. Some were sold, others were raffled, and some were given away.

Just before Mr Hartt left England — he has been back in Australia about two months — the authorities were appointing artists to go to France to do camouflage and war record work.

I tried very hard for 12 months to get over there, said the artist, but I did not get a chance. Up to the time I left there the only men they allowed to go across were civilian artists from London. They could got plenty of men in the A.I.F. if they gave them a chance.

So important is camouflage considered that a school for teaching men that work has been started in England. Mr Hartt explained that photographic apparatus used on aeroplanes was so good that any careless work in the camouflage painting was quickly noticed, and the whole deception might then be of little avail.

Camouflage is now, and is going to be, a big thing, said Mr Hartt. You can judge of the importance attached to it when they have so many well-known artists at work on it. 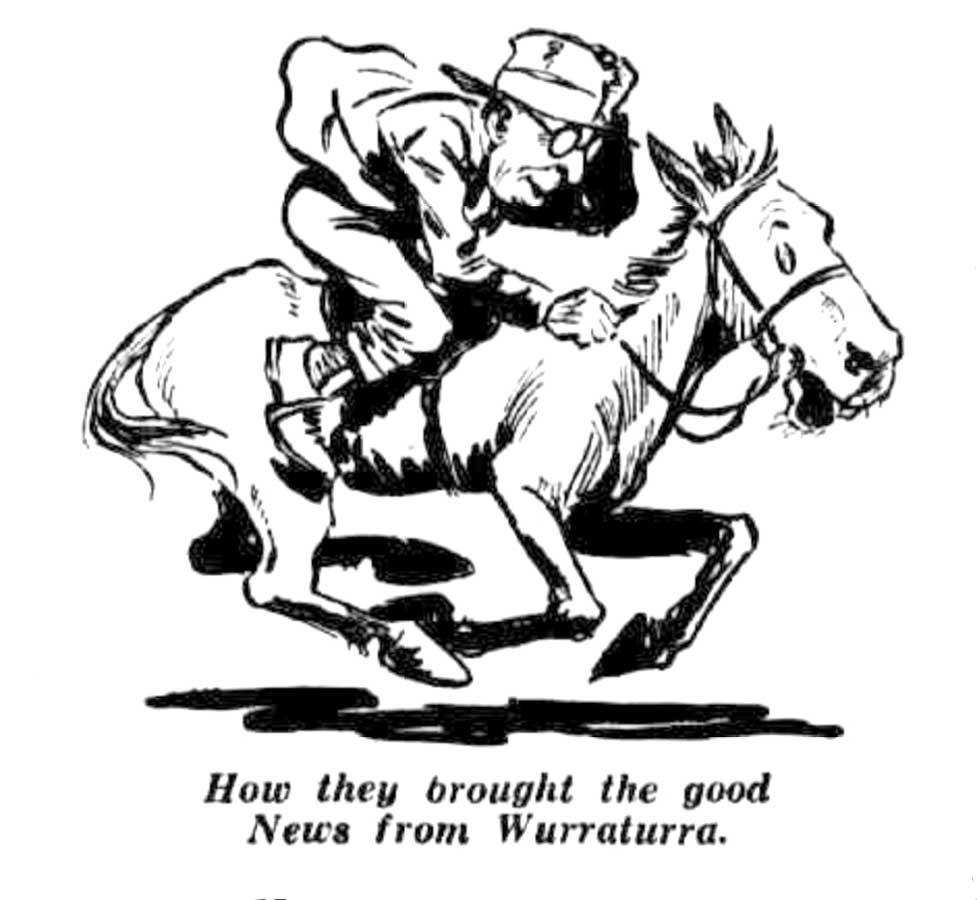 After his discharge from hospital Mr. Hartt, at the insistence of Charles Bryant and Will Dyson, was made an honorary member of the Chelsea Art Club. There he met most of the Australian artists living in London. Among them were George Coates, George W. Lambert, Tom Roberts, H. S. Power, Fred Leist, Arthur Streeton, Blamire Young, and Mrs Dyson (Ruby Lindsay).

One impression that Mr Hartt has brought back from England is that the Anzac Buffet in London is the best club for soldiers there.

I cannot speak too highly of the work it does. The men appreciated it so much that from the time it started to the time I left England not one Australian or New Zealander had to be put out of the club for misbehavior. Some people have talked of the behavior of Australians, but I can say that in that club I have not heard the least bit of bad language.

FAMOUS for his characterisation of Digger types, Cecil Hartt, the well-known Sydney artist, was found dead in the bush at Moruya yesterday.

Medical opinion was that death had taken place two days previously. Mr. Hartt left his home in High Road, Vaucluse, on Friday morning, apparently with the intention of going to work. That was the last seen of him, as he did not put in an appearance at his office. It is understood that he had been suffering from ill-health of late.

A member of the staff of “Smith’s Weekly,” Mr. Hartt was the first artist engaged by that paper when it was launched shortly after the war. He was a masterly creator of types; his “Digger” and “John Taxpayer” characters being notable examples of his skill in this branch of art. Mr. Hartt served on the Peninsula with the original 18th Battalion and was badly wounded at Lone Pine.

He was afterwards engaged in staff-work in London. During his sojourn there he produced “Humorosities,” & series of Digger drawings which displayed his rollicking sense of humor, and, incidentally, made his name as a cartoonist. Since his return to Australia Mr. Hartt had identified himself closely with the art movement in Sydney and was a stalwart champion of the distressed ex-soldier.

CECIL GREAT HEART ACROSS THE ROAD

After a week of heart-breaking silence, I remember no more characteristic saying of Cec. Hartt’s. Than he, none had a finer sense of the eternal lunacy of things. “It’s not right,” and “it“, might be the matter of a man, a woman, a dog, or a principle. “I won’t have it,” he’d say. Which, of course, settled “it.” And now that Cec. is dead? It’s not right.

HE was a man who felt the tragedy of life and did not cry; who sensed the comedy of existence and laughed. And made us laugh. There’s a story that Cec. once made the King laugh. There’s the fact that he made a nation laugh and understand. That’s more than grinning and bearing it. We can all take a knock. Cec took it and wore it as a decoration.

For him every cloud had a ticklish lining. He made it that way for you and for me. Now we have to rub along without him. It’s not right.

Forlorn will poor old Dummy stand when a skeleton is he. But Cecil will sketch him with a grin, for their immortal glee.

Cecil Great Heart was his name. So much for the man. As for the artist? He was the man spilling his humanity through his pen point. The world was his drawing board and the world and his wife his models. These he drew as to reconcile them even with their saddest lot. 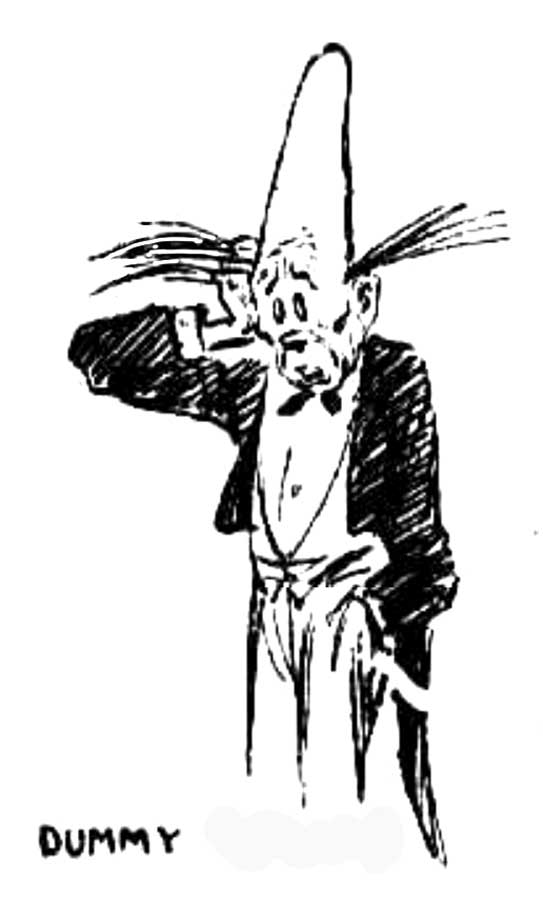 Poor old inarticulate Dummy — speechless with indignation, the butt of every politician and tax-gatherer, victim of every unscrupulous tradesman.

But even Dummy’s pathos was an inherent pathos. To the eye he was as big a figure of fun as any other character Cec. created. To the mind only he was the underlying pity of all things living. And now they say Cec. Hartt is dead. It’s not right – He has just slipped across the road. Cec. never let a friend down in his life. Perhaps he wanted to see Henry Lawson about something. That sounds like their laughter now Just across the road.