I was researching the Eureka Stockade in Ballaraat, 1854. (yes, it had 4 “a’s” then) and came across a pictorial phenomena I hadn’t been aware of. 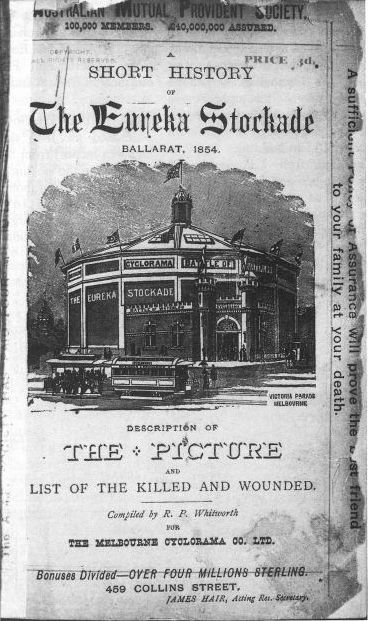 Cycloramas were introduced to Australia by American promoters Howard H. Gross and Isaac Newton Reed and were popular between 1889-1906. The country’s first cyclorama opened in George Street, Sydney in March 1889 presenting ‘The Battle of Gettysburg’. Two months later a similar cyclorama opened in Melbourne presenting ‘The Battle of Waterloo’. The cyclorama building in Melbourne was a large hexagonal building designed by George Johnson situated in Victoria Parade, Fitzroy (now St Vincent’s hospital) and then referred to as Eastern Hill. It cost £6,500 pounds to build, the picture was 1858 square metres and valued at £20,000, with the whole exhibition costing £30,000. 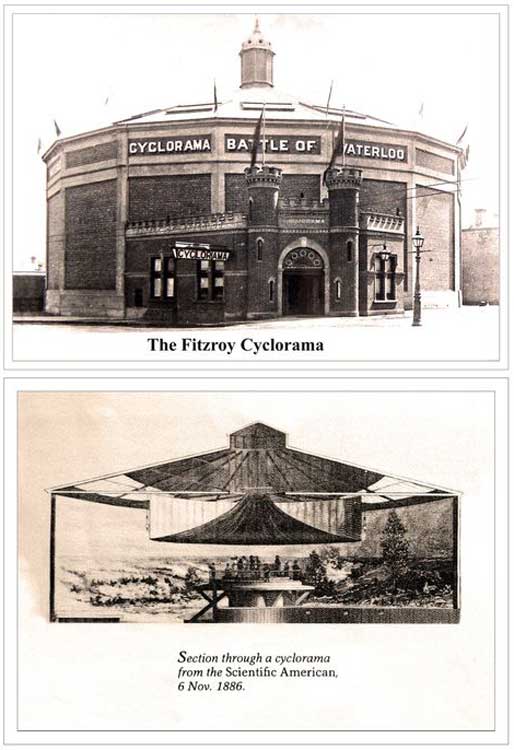 A cyclorama of more local historical relevance to the Victorian public, ‘The Eureka Stockade‘ opened in 1891. The 1854 rebellion of gold-miners against exorbitant licence fees was still quite recent and the story surrounding the events was gaining legendary status.

From 1889 to 1906, the Cyclorama in Fitzroy on Victoria Parade, displayed a 360-degree oil painting, measuring 122 x 15 m. The picture, lit from above, was viewed from a central platform. Real objects, such as trees or bushes were merged into the painted picture to heighten the illusion. The Fitzroy building was later used as a circus, boxing ring and cinema, before demolition in 1928. 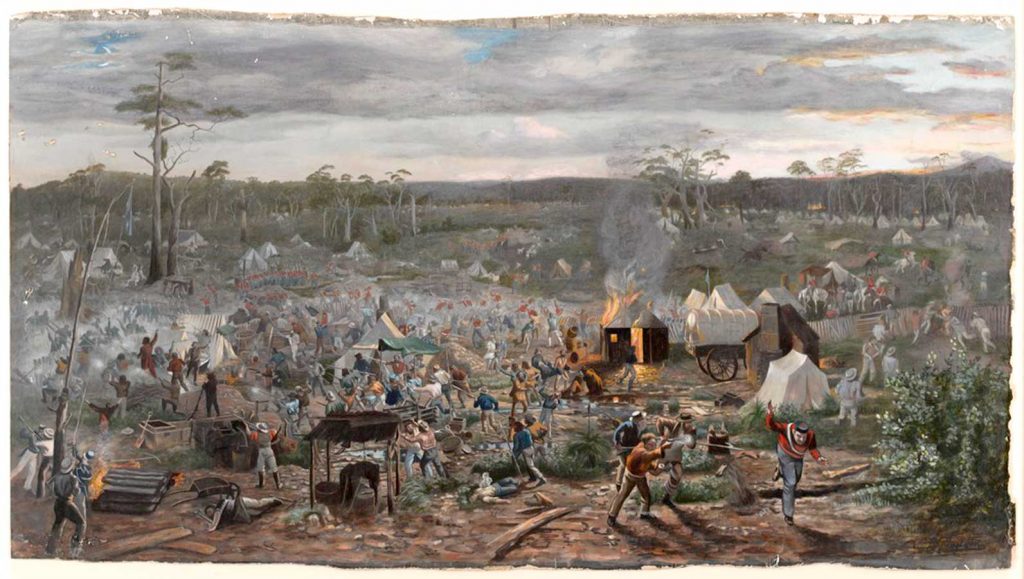 This work is an over-painted photographic print, photographed by an unknown photographer from the painted canvas by Izett Watson and Thaddeus Welch, which was exhibited as a painted cyclorama in the  Cyclorama building, Fitzroy, ca. 1891. This is based on the evidence that the pulleys and brick wall are discernible at the top edge of the image which B. Ireland has not over-painted. This artist may by Beryl Ireland, who was a miniaturist and studied at the National Gallery of Victoria Art School in the 1870s. Beryl Ireland was the niece of Richard Davies Ireland (1816-1877), the lawyer for the Eureka defendants in 1855. 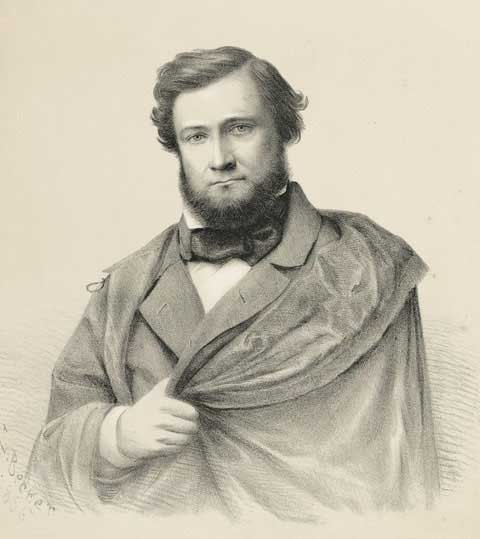 Eureka rebellion leader, Peter Lalor who lost his left arm in the stockade

The ” Eureka Stockade” Cyclorama is a vivid reminder of the most exciting page in Victorian annals, for the Eureka was the birthplace of liberty on this continent, the germ of the Corner in our Legislative Assembly. Particularly the eye is caught by the flag of the Southern Cross, hanging on a high sapling, and doubtless this will become the Australian National Flag, with its four white stars on a blue ground, though hoisted there by Lalor as the insignia of a lawless Republic.

The bluestone monument is a ridiculous incongruity, with big cannons. Soldiers and reliefs are equally honoured, which is a complete puzzle. As for the Cyclorama, one fancies a good deal more of life and dash could have been infused into it, for the cruel struggle was desperately hot during the quarter of an hour it lasted. 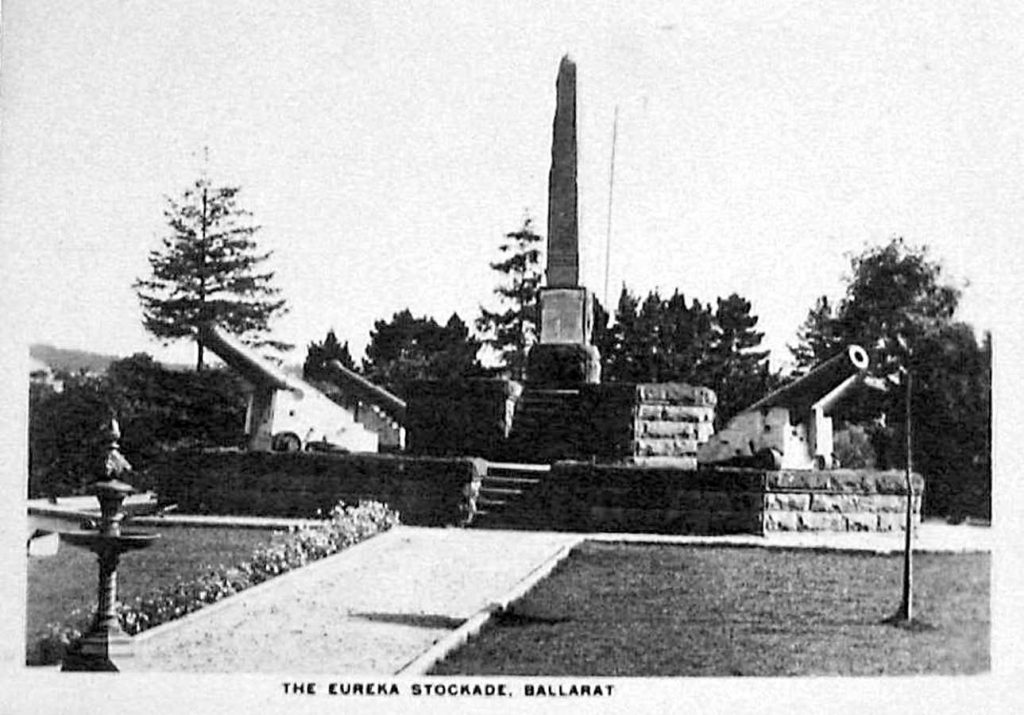 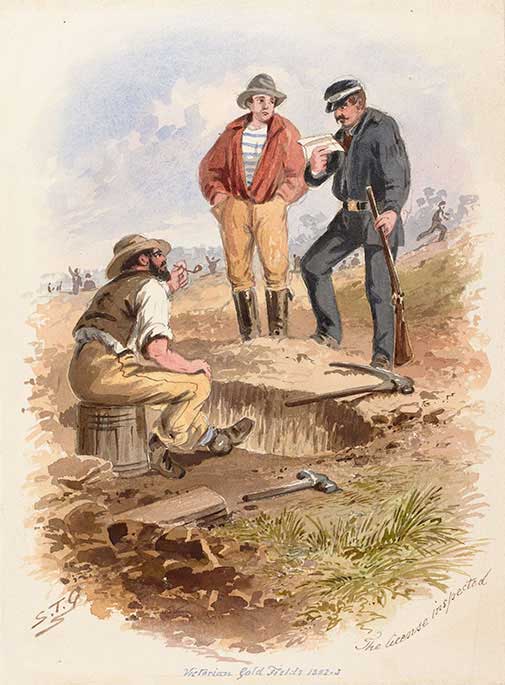 Checking for a gold digging license 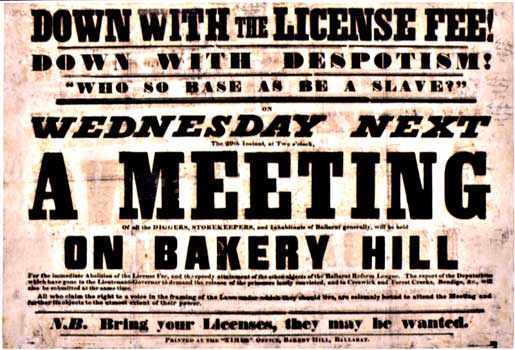 The Cyclorama is about the best paying show in town and has been doing a marvellous business during the holidays. Oh, if the writer were only a shareholder in the concern !