Being left-handed has come a long way. These days it’s even considered the sign of a creative mind. Yet so many questions about left-handedness remain unanswered, from its causes to the meaning of its relationship with autism and Tourette’s syndrome.

For centuries, left-handers were despised and persecuted around the world. The negative attitudes left a legacy in many languages: think of the undertones of ‘gauche’, deriving from the French word for left, or ‘sinister’, which means the same in Latin. Even in Chinese, the word zuois a synonym for unorthodox or wrong.

There’s not a language in the world where left-handedness does not have a negative connotation, according to Howard Kushner, a public health professor at Emory University in Atlanta, who has spent years studying the misunderstood trait. And while it’s considered a relatively benign characteristic in the west today, he suspects the stigma against ‘sinistrality’ persists elsewhere. 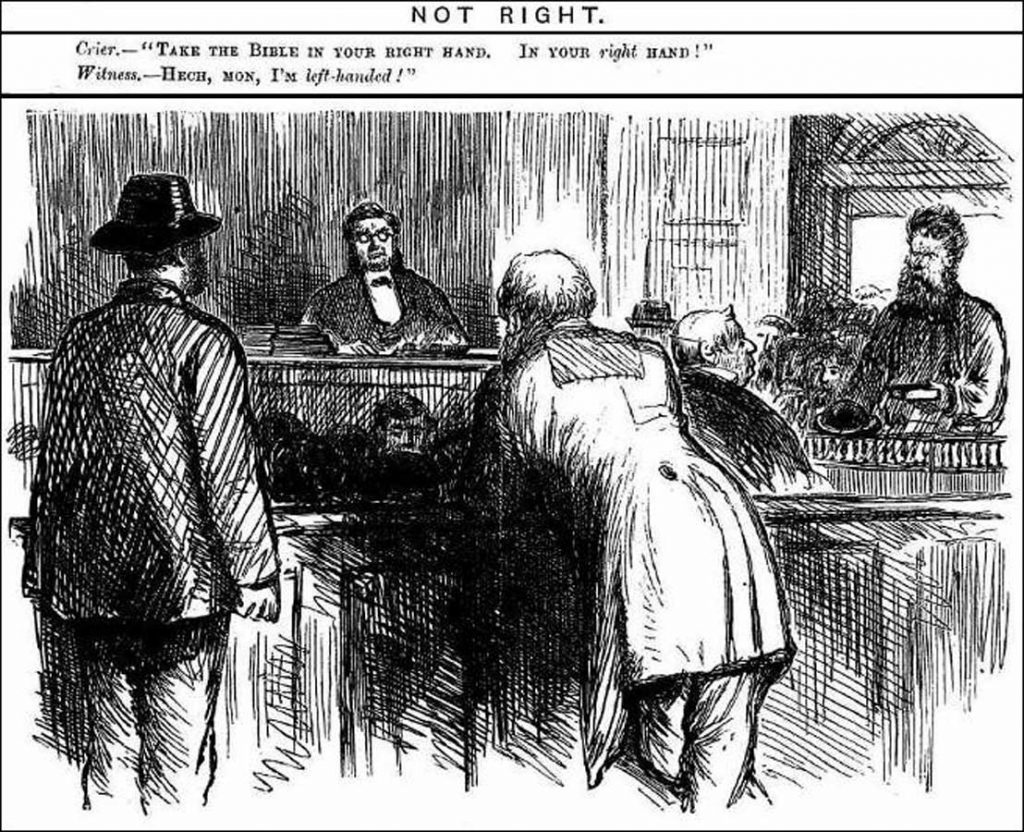 Here in Oz the terms ‘lefty’, ‘southpaw’, ‘cack-handed’ and especially ‘Molly dooker’ are used to describe myself and my sinister compatriots of the left. Yes, I too, was beaten about the knuckles with a ruler by my teachers in primary school to stop my wicked left handed writing.

Violins are adapted for the use of left-handed players by reversing the order of the strings and the location of the bass-bar and sounding-post. Some left-handed violinists, however, play upon instruments with the strings arranged in the usual manner. There are no left-handed pianos. Guitars are made left-handed simply by reversing the strings. With the banjo it is necessary also to change the form of the neck on account of the short string. Left-handed flutes are made, the location of the keyholes and keys being changed to the opposite side of the flute. There are made left handed cornets, and occasionally larger brass instruments, which are so constructed as to bring the pistons as convenient to the player as they are to the right-handed player in the instrument as ordinarily made. The proportion of musical instruments made left-handed is extremely small — very much less than 1 per cent.

Jimi Hendrix was naturally left-handed but his father, Al, initially tried to force the young James to play right-handed. Al Hendrix reportedly believed playing left-handed was a sign of the devil. 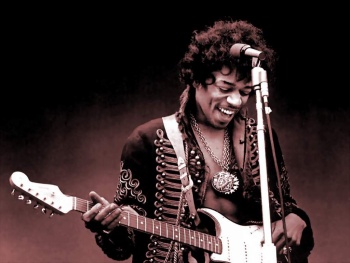 So Jimi, renowned as the greatest rock guitarist of all time, played right handed guitars upside down and the strings rearranged to suit.

There seems to be evidence that some animals, at least, are left-handed. Parrots grasp and hold food with the left claw. Livingstone stated that lions struck with the left paw; he held, indeed, that all animals are left-handed. One investigator who has been shaking hands with parrots to verify this observation, finds that the left-handed habit may be induced in parrots from the fact that in offering one’s finger for the parrot to grasp it is usually that of tho right hand. The parrot therefore puts his left claw forward. If a left finger be offered, the bird will put forward the right foot.

As left-handedness is an inherited characteristic, apparently behaving as Mendelian recessive, it is interesting to note the belief of some investigators that it is one of the stigmata of degeneracy. Prof. Bardeleben, in a recent address, said that…

After pointing out that the gibbon and orangoutang are as a rule right-handed, and the gorilla and chimpanzee left handed, the speaker decided there was no evidence at all that a left handed person was mentally or physically inferior.

If you had lived at any time in the period 2500 B.C. to A.D. 1500, and had been left-handed, you would have been regarded as one highly favoured by the gods and far superior to ordinary folk. If, of your own initiative, you had not seized on power, it would have “been placed in” your hands. But in all probability that would have been unnecessary; for all down the ages the left-handed have gone ahead and made a success of life. They’ve something that the right-handed haven’t. The leading Pharaohs were left-handed ; so were the Caesars ; so also Alexander the Great and Charlemagne.

Whether Nature compensates the left-handed by endowing them with special talents is a matter of speculation. The fact, however, remains that the left-handed are, in Brain power, far superior to the right handed. A schoolmaster, through whose hands, thousands of boys have passed, is emphatic on that point. No left-handed boy is, or could be a fool is his dictum.

The explanation advanced by scientists is this : The left side of the body is controlled by the right side or half of the brain, and vice versa. And as the left-handed use their right hands considerably more than right-handed folk use their left hands the result is that the left-handed call into play, use, and develop, their whole brain, and not one half and a fraction.

It is dangerous to force a naturally Ieft-handed child to become right-handed, according to Dr. H. Rumsey, a Guy’s Hospital (London) expert, because it overloads the left side of the brain. He says the brain controls the hands diagonally, and the left side of the brain controls the speech. Nature makes some children left-handed to give the speech centre extra room. Sometimes left-handed children, when forced to proceed to be light-handed, develop stammering, which ceases when they are allowed to follow their instinct. The infallible test, the doctor adds, is ball-throwing. Only a natural left hander throws a ball left-handed. The London County Council now allows left-handed pupils to continue writing left-handed.

During the hearing of a Workmen’s Compensation Act case at Grafton last week, applicant (for whom Mr. A. S. Henry appeared) stated that it was his left wrist that was broken and he was a left-handed man, had married a left-handed woman and his seven children were all left-handed. Mr. Henry:

That is an interesting example of either heredity of imitativeness.

[Note: Ha! Classic case of legal eagle having a bob each way!] 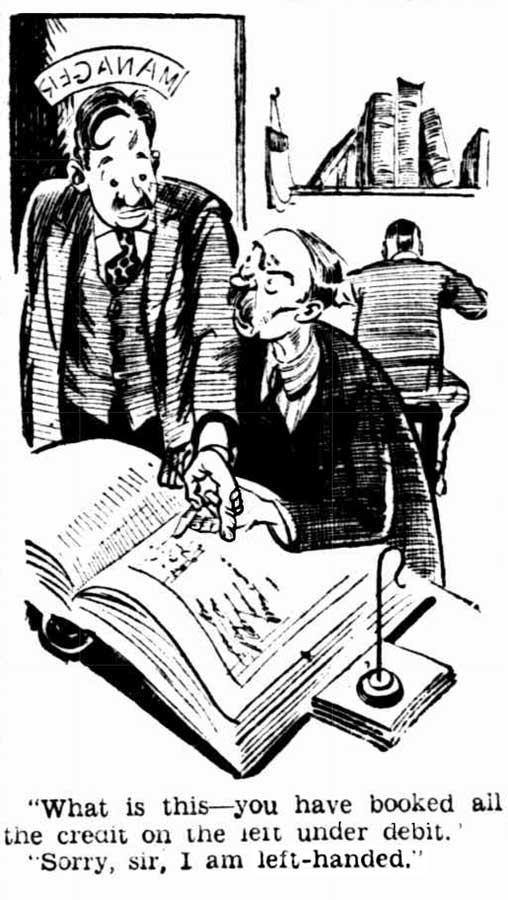 Most animals are ambidextrous. All bears are left-handed, but rats, like humans, are both right and left handed.

SIR, — My son, aged 10, has been caned at school for writing with his left hand. I am left-handed, and so was my father.

LEFT-HANDERS NOT LIKED AS TEACHERS

BRISBANE: The Director-General of Education (Mr. Edwards) has disclosed that the Queensland Education Department does not encourage left-handed people to become teachers. Mr. Edwards said it was not a hard-and-fast rule to reject applications from left-handed people. A few had been appointed. Left-handed teachers writing on blackboards made it awkward for 99 per cent of right-handed pupils. 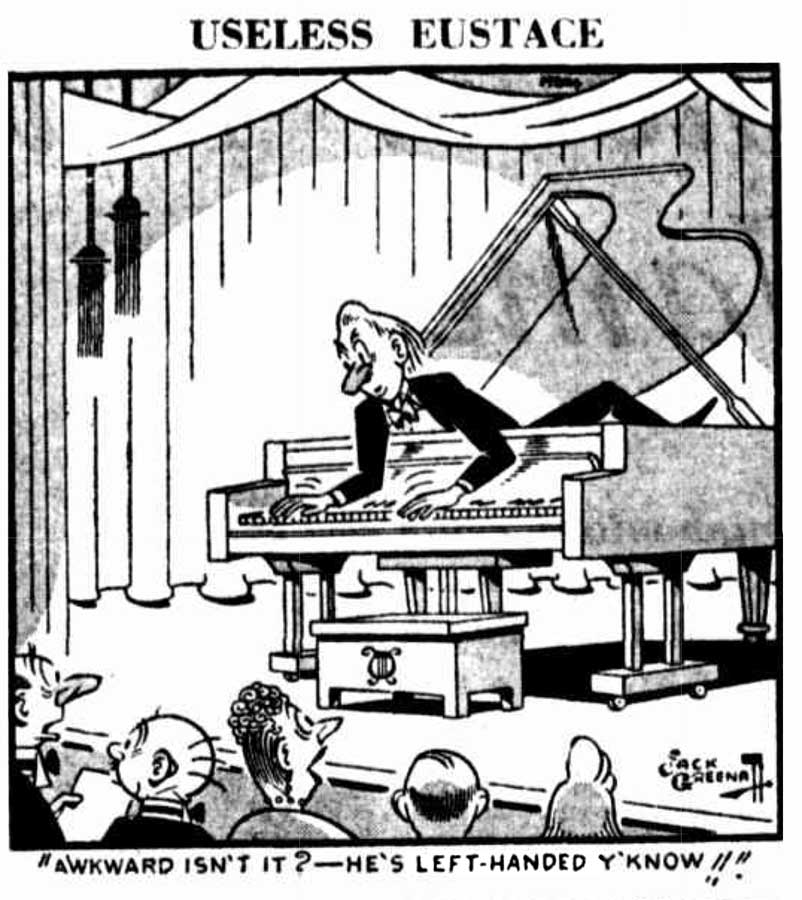 A medical examiner has drawn attention to the fact that there are more left handed people now than there were thirty years ago. In point of fact, about 6 per cent of people are left handed. A right handed boxer generally dislikes facing a left handed opponent because he finds the latter’s tactics confusing. An interesting fact, too, is that no major golf championship has ever been won by a left handed player. Most animals are “ambidextrous,” but some rats are left pawed, while all bears are.

In Tennessee (USA) the local bank issues special cheque books for left-handed people. These cheque books are printed with the stub on the right-hand side instead of the left. Left-handed clients claim they are much easier to handle. It would be a good idea if some of our banks did likewise. — Left-handed Lou Pingelly