I was a quite surprised, when scanning our old newspapers, at the repeatedly negative portrayal of our “sundowners” or “swaggies” as I’d call them. Lazy, greedy, untrustworthy alcoholics – the reporters barely had a good word to say – let alone any grudging wink towards the loner individual who refuses to bow to tradition /authority …. 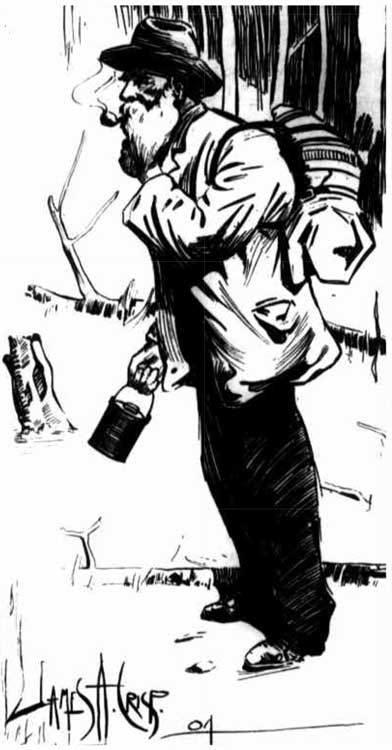 The Sundowner is of the genus loafer and of the order tramp. He is indigenous, or at least peculiar to the bush and may generally be recognised by his habits and integuments. Our artist has happily in his sketch portrayed the typical sundowner, with his swag, billycan, and other paraphernalia.

His habiliments are neither new nor savoury, tor the reason that they have seen long service.

He wanders from station to station, trusting to Providence and the generosity of those to whom he may appeal for assistance. Cool as a cucumber, thoroughly stoical, full of quaint anecdotes, thankful for small mercies, averse to labor of any kind, he is content with a stretch in the stable, with a few mouthfuls of the coarsest fare and any drink, malt or spirituous.

He is always on the move. Starting away at daybreak, he enjoys the fresh, invigorating atmosphere of the morning, and gets well on his day’s march before breakfast. 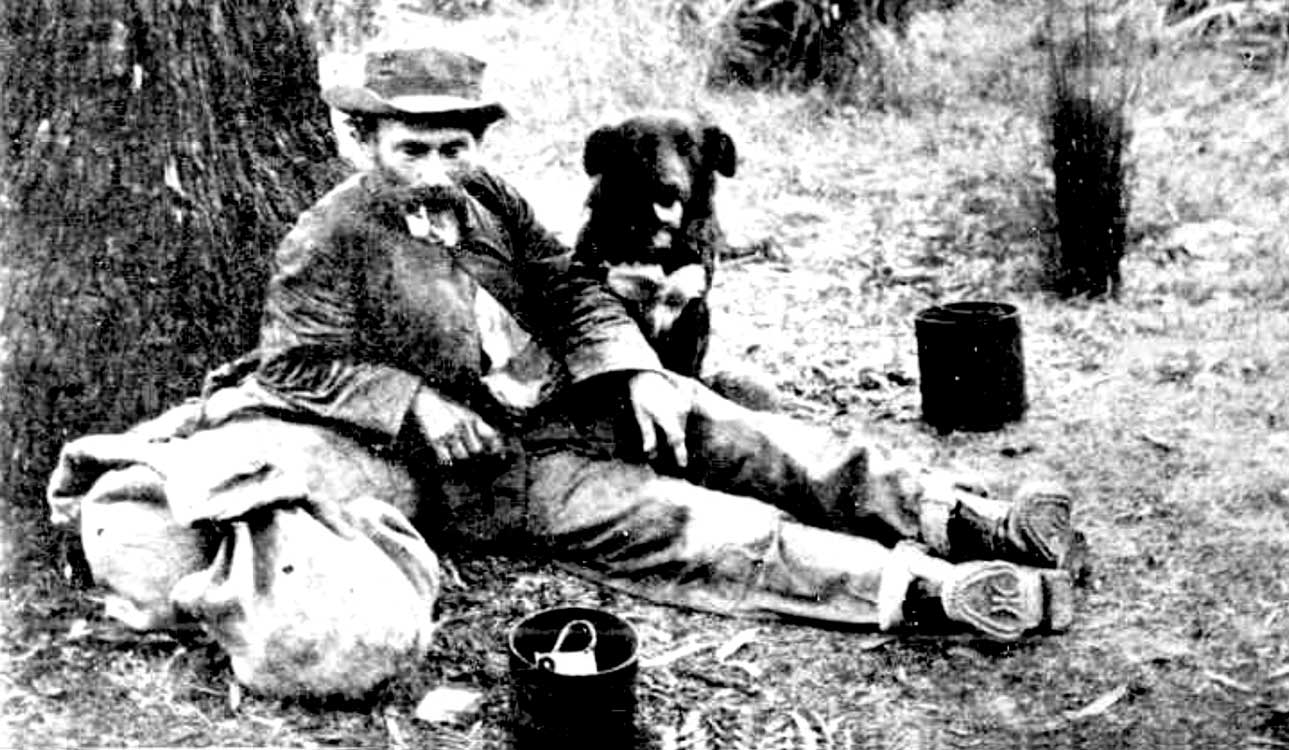 The smoke of a hut in the deep recesses of the bush is to him the signal to halt and try his luck. He never hungers for lack of asking. If he is very hard up he intimates that he has not had food of any sort for perhaps three days, that his exertions to obtain a job were quite fruitless, and that unless assisted he will probably have to lie down in the bush and die. 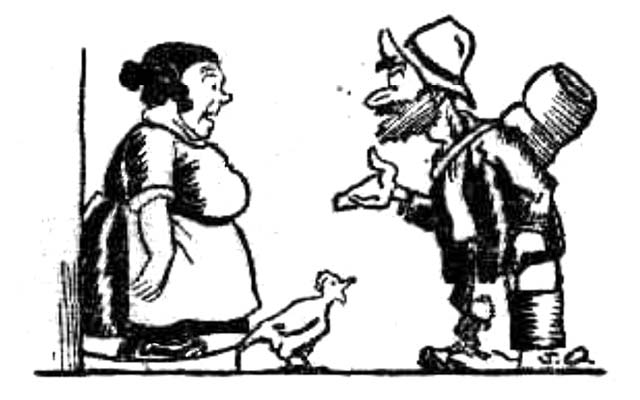 The appeal thus made is usually irresistible. Sometimes he is politely requested to do a little work for his grub. We have thus a sketch of the sundowner “sold.”

“If you want bed and tucker here, my man,” observes the squatter, “you will have to cut some chaff first.” Work is what the soul of the regular sundowner abhors, so he coolly proceeds to shoulder his swag once more, suavely remarking, “Ah, good evening, boss,” and proceeds on his way. 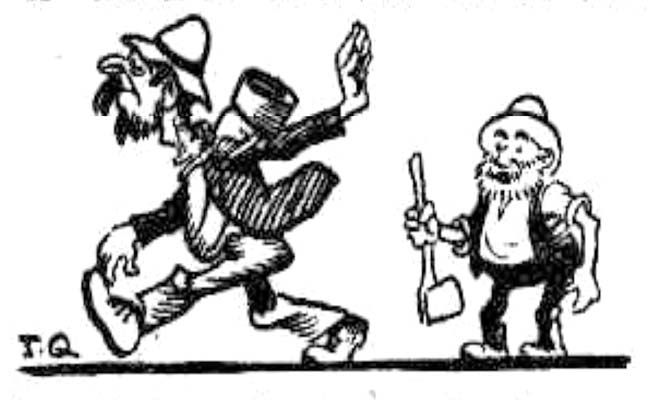 He may be next seen in the enjoyment of his siesta. Under the welcome shade of some giant eucalyptus he slumbers in peace. His swag is under his head, his billy is laid beside him, and, with his hat drawn down over his brow and his hands in his pockets, he woos tired nature’s sweet restorer. In the afternoon he resumes the even tenor of his way.

Should he be fortunate enough to meet a station on his road, he calls at the homestead, and probably obtains a little meat and bread, with sugar and tea thrown in. Upon these he makes preparations to fare sumptuously. He lights his fire and in his billy makes his tea, and proceeds to dispose of any titbits he may find in his wallet, winding up with a post-prandial whiff of his never-failing pipe. 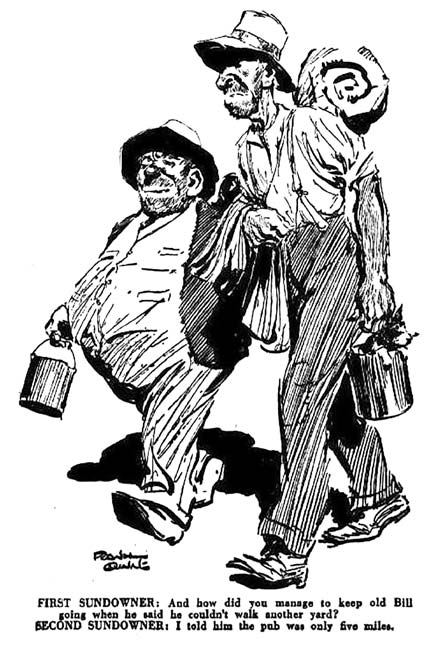 He may journey further, or he may remain on the ground and camp for the night — just as the humor suits him. The true haven of the sundowner is the bush shanty. Here he may be seen and studied in all his glory. As his sobriquet implies he, as a rule, times his approach to the “pub” about sundown, and the probabilities are that a number of kindred spirits are found loafing round about the same time. If the sundowner is “stumped,” and the landlord declines to “stand Sam,” there is nothing left for it but to sit on his swag outside and wait, Micawber-like, until something or some good Samaritan turns up. 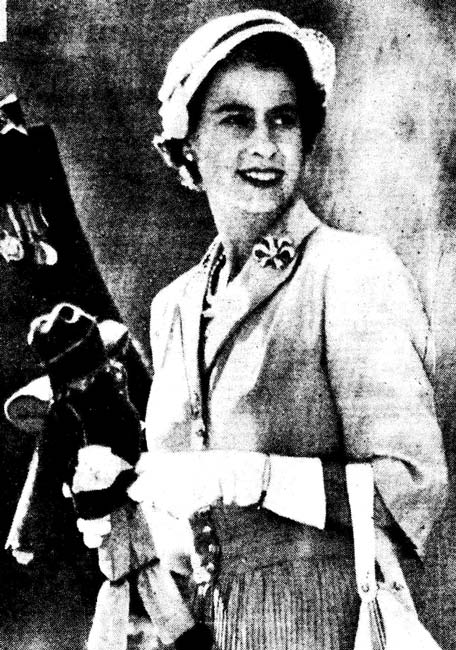 Swagman Keepsake:  The Queen looks delighted with a swagman doll which was presented to her at Echuca (V.) yesterday. She said that she would give it to her children. [March, 1954] 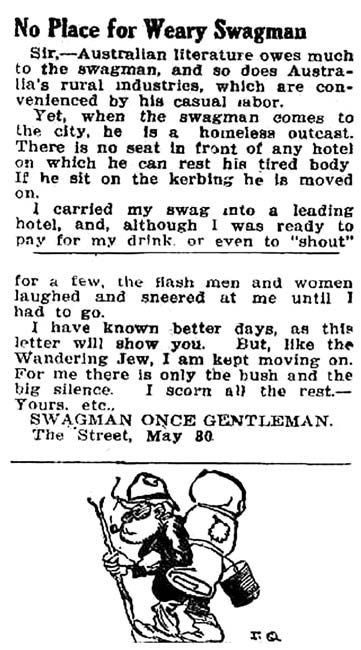 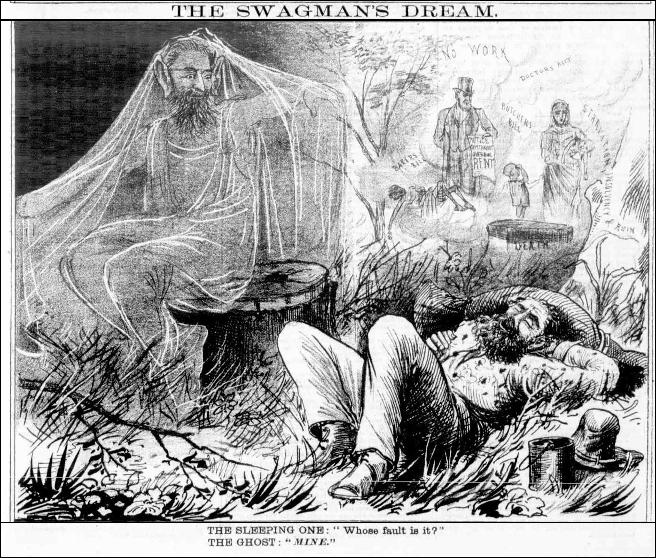