“Vumps” has been proclaimed as Australia’s “first comic book” – published in Sydney in 1908. Unfortunately it didn’t survive beyond the first issue, despite high quality input from cartoonists like Claude Marquet and an illustrated story from high profile writer Henry Lawson. Subtitled, “Pure Australian Fun,” the promoters promised that the comics…

will be clean and distinctively Australian, with no place for the pernicious sensational literature which disfigures the English and American so-called comic papers

Despite this bold claim the eponymous central character, Aussie boy Joe Vump appears on the front cover with an AMERICAN flag stuck in his cap (the US Navy was visiting Sydney). 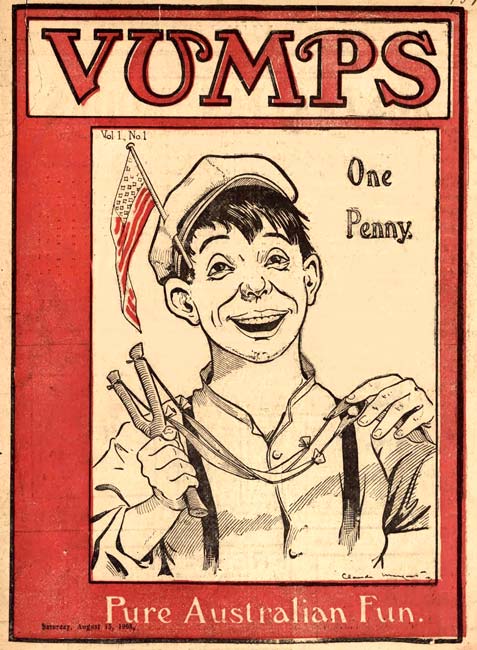 Two American blogs which feature ‘Vumps’ mentioned that Joe Vump is always pictured with – variously – a ‘catapult’ or a ‘slingshot’ – unaware of course that Joe would have called his boyish weapon a ‘shanghai’ or ‘ging’ here in Oz. 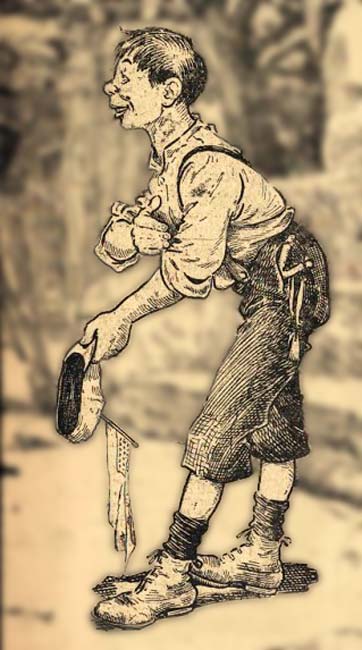 Included in the only issue was a short Henry Lawson yarn “Down Another Hole” – illustrated by Fred Brown.

It was Larry Church—an improbable-sounding name, belonging to a very probable man—who was in the habit of falling down abandoned diggers’ holes on his way home mostly towards early mass on Sunday mornings. Fortunately, it was a field where the sinkings were shallow, with steps cut in the sides of the holes, and help usually within hail. But this Sunday morning he left the pub early—about two o’clock—and, overcome, he blundered into a newly-deserted “married couple’s” hut, stumbled into the fireplace, and promptly went to sleep curled up in the ashes. Later on, he woke, cold, and looking up he saw a star or two.

“Down another hole!” he said.

And, being thirsty, he started to climb out. It was a bark chimney, with a clay, or mud-lined, fire-place, about twenty feet high and as wide as the hut—and about as bulky. Half seasoned bushmen built ‘em that way in those days. Larry got up by the help of the cross-bar for the pots; he stood on it and felt around.

He climbed a bit, by the help of the sapling and batten frame, and rested, with his long limbs spread-eagled.

“Phwhat sort of a crimson sundowner’s shaft is it ?” he said.

“Feels as if they’ve shlabbed it wid barrk, begob, an’ it’s shaped like a square funnel upside down.

But here goes! If it was the divil’s own sharrft I’d git out of it.”

He reached the top, scrambled over, and fell the twenty feet—fortunately on a rubbish-heap on top of which a discarded straw mattress had been thrown. It was sodden with recent rain.

“Down another lurid sharrft !” he groaned resignedly.

And he curled himself up on the rubbish and went to sleep again. The sun woke him, and he got up and bleered round.

He went over to them, and, kneeling down, peered down each in turn until the bottoms became distinct.

“Forrty feet an’ thirsty feet, if they’re a fut!” he exclaimed.

“I remimber gitting out of the deep one, but how I got out of the other I 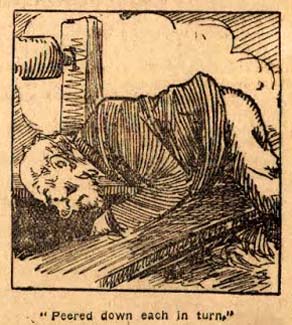 Muster done it in me sleep. Luk at that, now! Talk about the luck o’ drunks after that! Oi might ‘a’ broken me lurid nick.” 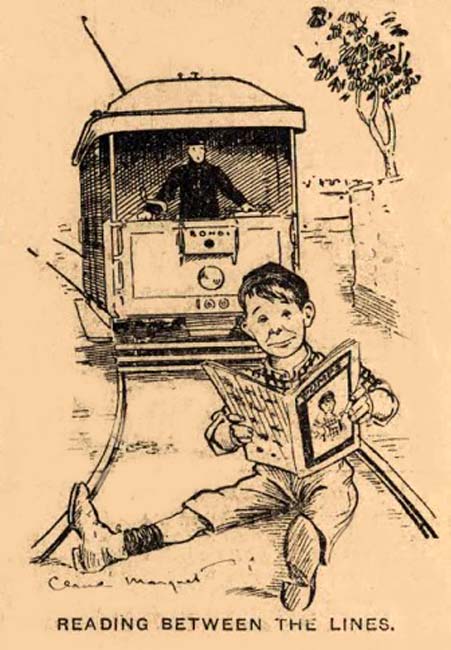 Another cartoon contribution from Claude Marquet…

Vumps’ single issue wasn’t able to bed down its core characteristics and it is, to my mind, much closer to an illustrated children’s magazine than a comic book.