I am just a bit too young to remember much about the Bodgies and Widgies of Melbourne.

First media references I found in old newspapers were around 1948. It is the fearful conservatism of 50s Melbourne I recalled when researching this teenage sub-culture. Zenophobic, authoritarian, puritanical, patriarchal and not very bright.

Aged around 9 (1961) I remember fearing the ‘Rockers’ up the embankment at Moorabbin footy ground during a local game. More on Rockers here. Maybe the Bodgies had all moved on by then? …maybe they didn’t like footy? Into mid teenage years it was ‘The Sharpies’ we had to look out for….

Lately a lot of harsh words have been said about bodgies and widgies.

Indignant citizens fulminate against them in the correspondence columns of the newspapers and a detective in a recent case at the Quarter Sessions said a lad of 17 had been led into crime by associating with ‘the bodgy set.’ 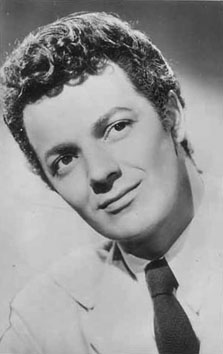 A bodgy, in case you haven’t met the phenomenon, is a youth who likes American type clothes, jazz, and juke boxes, and copies the long hair-do of Mr. Cornel Wilde.

A widgy is his female equivalent.

Bodgie-ism was a happier direction for a troubled society than the fanatical acceptance of Communist ideology, US anthropoligist, Dr Margaret Mead, said today. Dr Mead said society was not giving the teenager a place and meaning in society with the result that the teenager was, inventing his own symbols of importance. Such a teenage group was bound to have a great deal of crime pinned on it innocently, because it was different from the rest of society. The juvenile precocity of the Western world and the bodgie cult was …

a subconscious grabbing at life brought about by war and talk of war, said Dr. Mead.

No parents with any sense of responsibility would allow their children to associate with bodgies and widgies, or have anything to do with the cult. This was stated by a Roman Catholic spokesman Dr. L. Rumble today. Dr. Rumble said

blame for rise of the cult rested mostly on parents who had failed to exercise control over children. The cult resembled the insane existentialist cult in Paris, which has led to murder and other crimes, and to complete civic irresponsibility, he said

….to further strengthen the police belief that immediate action must be taken against these longhaired, peg-trousered, gum-chewing devotees is a statement from a noted English neurologist in London last week that there is a definite link between the taking of drugs and the ‘jiving bodgies and widgies’. The neurologist, Dr. Grey Walter, claims that jive is so fast that the minute electric waves perpetually radiated by the brain find it difficult to keep pace. Experiments showed that marijuana (sex drug) kept the brain stimulated to the degree that enabled the waves to beat in time with the speed of the jive tempo.  Melbourne claim bodgies have been responsible for several unprovoked assaults.

..the youth, 17-year-old Michael Leslie S’s, of no fixed address, was convicted of larceny and placed on a £10 two-year good behaviour bond. Big “Shoulders’ S’s” black hair was worn long and oiled, and he was dressed in a long draped coat, with massive shoulders, tight trousers, and crepe-soled shoes.

Moral Misfits In Comic Clothes Are Becoming A Public Menace

By A Staff Investigator

The bodgie cult in Australia is the most freakish and sinister youth movement since the old days of the razor pushes. In Sydney it is causing police much anxiety. Its members disgust decent living and decent thinking people…. 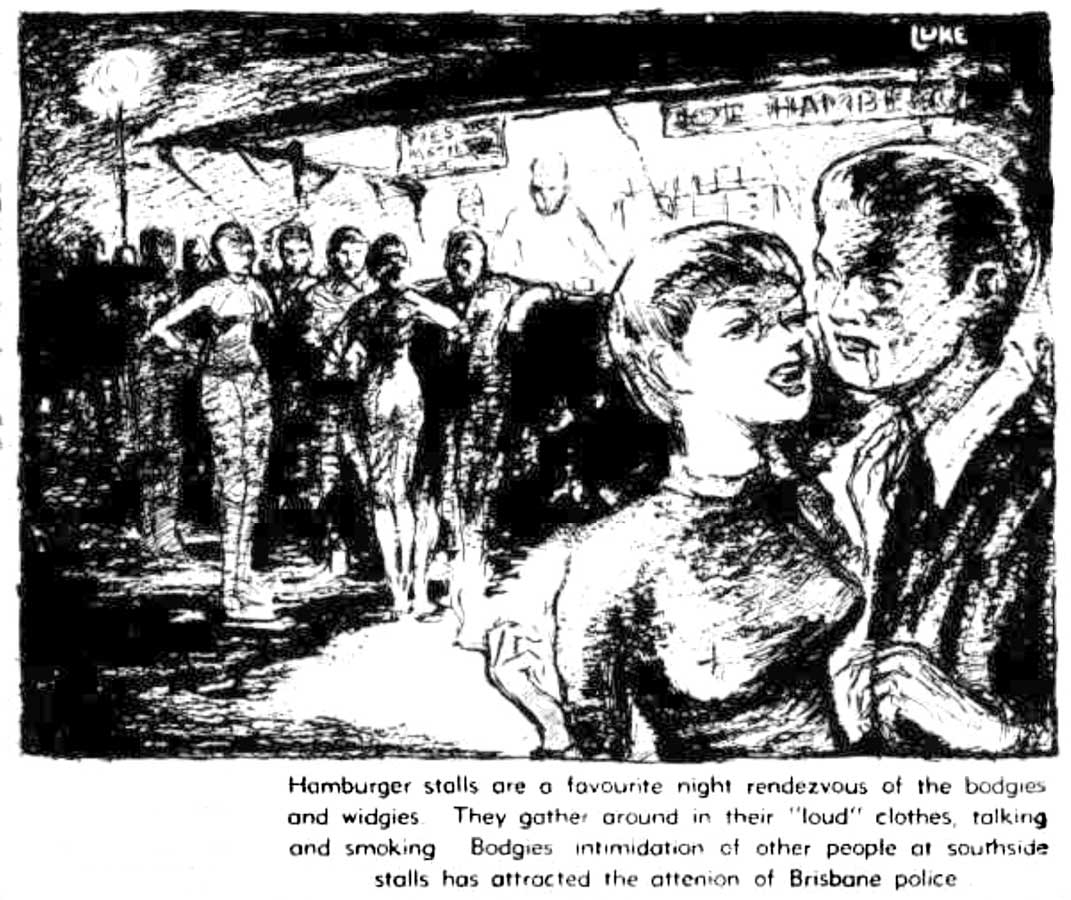 ….In Sydney the cult started in 1948, at Bondi. Its first members were the ‘Cornel Wilde’ boys, youngsters who had their hair cut after the style of the American film actor and lounged about the beaches in queer rigouts.

The cult spread quickly. From the original Bondi group, bodgiedom spread; to split up into the Railway Square group, the Oxford Street group (this latter centred on a hard-to-find dancehall with a super-hot jazz band) and the King’s Cross crowd, elite of Bodgiedom.

Australia does not desire the types of perversion being transplanted here by scum from portions of Europe. Bluntly speaking, many members of the bodgie cult are perverts, sexually and mentally. They have no place in a decent society. Small wonder that clean-thinking young Australian men should wish to clean them up.

cult does exist in Launceston, its adherents are not teams of gangsters. They are interested only in sex, and I have never had them before me in Court. Mr. Monaghan said:

There is a brilliant article “Bodgies and African American Influences in Sydney”, by Clem Gorman [2015] which explains how young Oz blokes in inner city Sydney in wartime

…..began to sport big, loose-fitting jackets with brightly coloured shirts, and wore their pants tight at the ankles, while key-chains dangled from their belts. They wore suede shoes, often with crepe soles. Their hairstyles resembled those of American film stars, long at the back and sides with curls cultured over their foreheads. They called themselves bodgies (their girlfriends were widgies) and were directly influenced by African American servicemen who were amongst the thousands of US soldiers clustered in the clubs and streets of Kings Cross, Surry Hills and Darlinghurst. The bodgie style, and the music and fashions that went with it, smoothed the path for subsequent waves of African American cultural influence in Australia, such as rock music, blues, gospel and hip-hop.

Its a fabulous exploration of all the cultural, social and psychological nuances and ramifications of the throwing together of young Australians and US /African -Americans during the second world war.

Its also a good counter the earlier hysteria of the 1950s Melbourne press.

The Melbourne Age suggested in a story in 1983 that the word bodgie arose around the Darlinghurst just after the end of World War II, when rationing had caused a black market in American-made cloth.

People used to try and pass off inferior cloth as American-made when in fact it was not: so it was called bodgie… When some of the young guys started talking with American accents to big-note themselves they were (also) called bodgies… 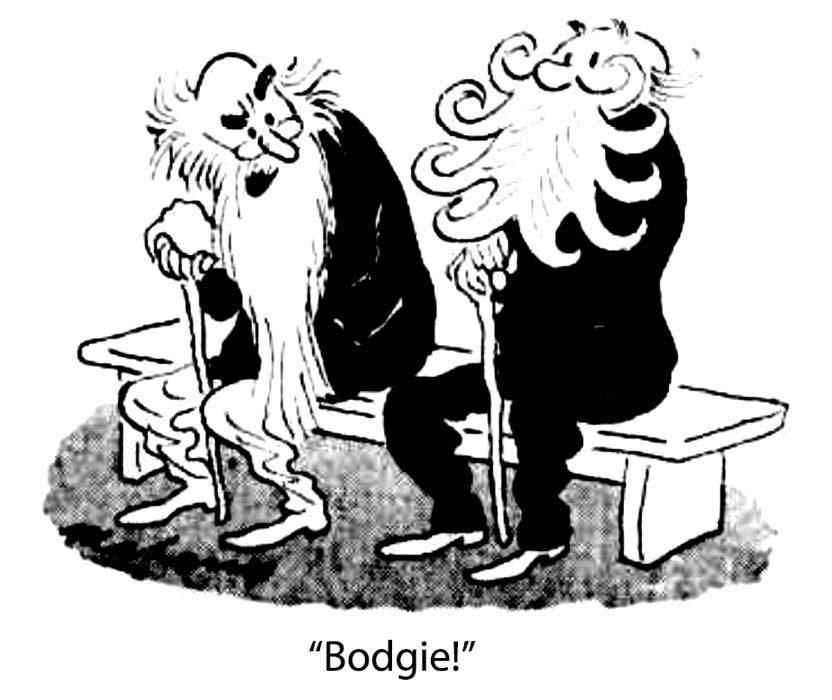